About 15 years ago I began having a strong desire to learn to knit. I didn't know anyone who knit and had never even held knitting needles, yet I had this feeling knitting would not only be something I would enjoy, it would also be something I'd be really good at. So, I bought a picture-heavy book called "How to Knit" (this was before YouTube and back when everyone went to bookstores). I also purchased some yarn and needles, and began dreaming of beautiful cable-knit sweaters, cozy hats, and warm scarves.

I spent the next few months "knitting" what could only be described as giant, horrible nests. I would read a section of the book, stare at the many figures on the pages, and try to emulate what I saw. But the more I knit the worse it got. I'd get so frustrated I would walk away. Then I'd come back to it weeks later only to repeat the cycle. It was very defeating, mostly because something I am not is a quitter (mostly due to stubbornness). 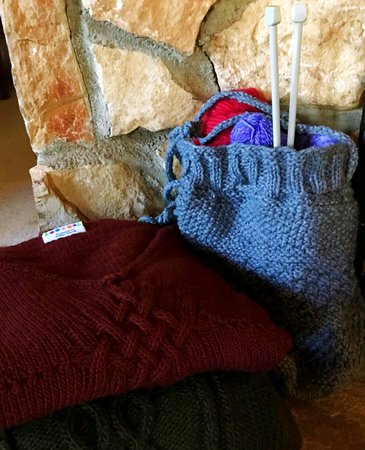 One day I was driving in an unfamiliar area and saw a yarn store. I hoped someone there could help me so I drove home, picked up my knitted disaster, and returned to the store. The owner of the shop said, "show me what you've been doing." I proceeded to knit a few stiches while she looked over my shoulder. She then adjusted my right hand and showed me how to move the yarn in a different way than I'd been moving it. "Try it like that," she said.

I began knitting and everything changed. I almost couldn't believe how a simple tweak could make such a radical difference. Not only did she show me the right way, she also said something that changed my view of learning: "A lot of people make that same mistake. They just need someone to help them fix it."

Her words were transforming. They turned me from thinking I couldn't learn something I had an unexplainable passion for, to starting on the path toward mastery. Within 6 months I was an expert knitter who only knit highly complicated patterns, and within a year I was teaching knitting classes.

As a Content Developer responsible for taking complex course designs/learning objectives, and turning them into impactful courses, I often reflect on that moment in the yarn store. I had the passion to learn something new, I found a good resource, and I practiced. Yet looking at pictures and reading about it weren't working. I needed someone to show me how to do it. To watch what I was doing wrong, show me how to do it right, let me try it, and reassure me they were available for more help.

When I design and develop learn-by-doing activities I don't ask myself what can we tell our learners. Instead I ask myself:

That day in the yarn shop was pivotal for me. Not only did I acquire the skills needed to knit dozens of items I once thought I'd never be able to do; I also began cultivating a new approach to learning. I knew if I could just find someone to show me something and then let me do it, I could learn anything. Since then I've tackled many other challenging things including learning to play traditional Chinese Mah Jongg; learning to read, write, and speak Arabic; and learning to play the violin. I learned all of these things by doing them and by getting help from experts, while (in some cases) wearing a great hand-knit sweater. I hope the participants in our learning programs leave feeling that same inspiration.

is a Content Developer at Socratic Arts, where she has worked on designing, developing, and delivering an online software systems master's degree program, numerous online undergraduate short courses, and several in-person corporate training programs. Prior to joining Socratic Arts, Ms. Crouch worked as a senior writer and instructional designer for iCarnegie, a subsidiary of Carnegie Mellon University, where she created learn-by-doing courses for a variety of international universities and businesses. Before that, Ms. Crouch spent five years working for Carnegie Mellon University Qatar as the Publications Manager. Ms. Crouch is an award-winning journalist, as well as an experienced graphic designer, international marketing professional, and content developer. A Pittsburgh native, Ms. Crouch holds a B.S. in Business Administration from Duquesne University and an M.A. in Journalism/Mass Communication from Point Park University.

We don't build one-size-fits-all solutions. We partner with you to identify your company's unique needs, issues, context, and culture.